Our planet receives 342 [W/m²] of solar energy (*), 235 of which contribute to its thermal equilibrium. (*) Averaged over the year and scaled to the total surface of the earth (continents and oceans) at the surface level. 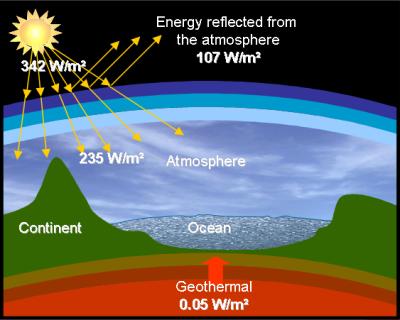 As long as the planet emits as much heat as it receives from outside (from the sun), or from inside (from the center of the earth or from human activity), its temperature remains constant.

Therefore, prior to the current Global Warming, we could argue that the planet was in equilibrium: 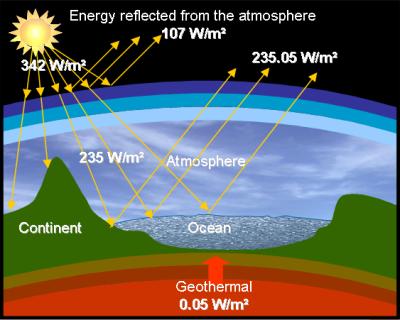 Since the 80s, this equilibrium seems broken by the addition of an extremely small power of human origin which amounts to 1.5 x E13 [W] and which represents only 1/10,000th of global energetic fluxes.
This situation is all the more surprising since at the beginning of the previous century a “solar forcing” (attributed to a variation in solar activity) tens of times greater than this current human power only generated an increase of a few 1/10th[°C] (1/10th K). 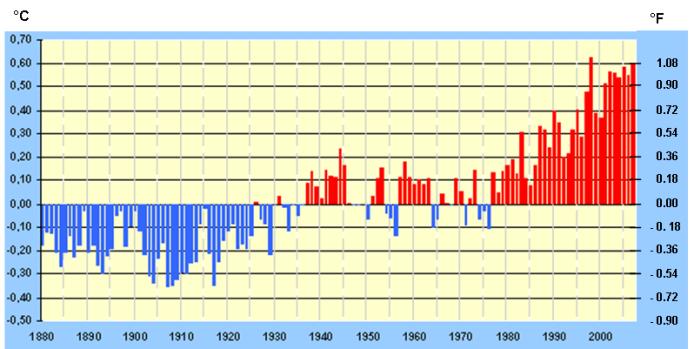 Annual anomaly of continental and oceanic temperatures from 1880 to 2007 in °C
Source: National Climatic Data Center